Marseille and PSG can posture all they want, but we all know that the real derby in Ligue 1 is between Lyon and AS Saint-Étienne. A tradition that goes back decades, these two clubs have been fighting for regional pride and honor for almost 70 years.

The cities are only 50 kilometers apart, but the different cultures of the two cities ensures a fierce rivalry. Saint-Étienne is France’s most successful club, but they reigned in the ’60s and ’70s, whereas Lyon were nobodies in the football scene until the turn of the century. OL vs. ASSE has always been a battle of the haves and have-nots, and this Friday will be no different.

It pains me to write this, but ASSE are doing very well this season. Perennial mid-table finishers, manager Jean-Louis Gasset has shaped them into genuine European contenders with a possible shot at the Champions League. They’re currently in 5th place with 23 points, but that’s only 3 points from 2nd place Lille. With 6 mins, 5 draws, and 2 losses, they’ve scored 19 goals and conceded 17.

Lyon are sitting right above them in 4th place. With 24 points, they’ve won 7, drawn 3, and lost 3, scoring 23 goals and conceding 16. This game is crucial because for the first time in a long time, OL and ASSE are direct rivals. It’s in the interests of both teams to win – 3 points brings them closer to the Champions League while also widening the gap between the two clubs.

The record between the clubs is in ASSE’s favor, but if you factor in modern results, OL comes out slightly better. It’s “slightly” because ASSE are no pushovers and have walked away from Lyon with draws and even wins. In the last ten derbies played at Lyon, OL have only won 3 times. They drew 5 times and lost twice.

Riot police are an expected sight at games between OL and ASSE.

ASSE had a rather stable summer. They lost Jonathan Bamba to Lille (on a free transfer, how tragic) but signed Remy Cabella from Marseille. Astute OL fans will also recognize Timothée Kolodziejczak, ex-OL product who is on loan from Mexican club Tigres. All reports so far of Kolodziejczak have been positive, so it will be interesting to see him come against his old club.

Side note: given the intensity and ill-will between the two clubs, it’s rare to see a player who’s worn both an OL and an ASSE jersey. There have been only a few dozen over the span of 70 years, and usually these stints ended in tears. Notable players who’ve played for both teams are Gregory Coupet, Bernard Lacombe, and more recently, Bafetimbi Gomis and Francois Clerc. Kolodziejczak only played a handful of games as a youth prospect before leaving, but chances are there will be at least some jeers headed his way.

This is a delicate period for Lyon. Many of the players are returning from international break and had very little rest before the derby. Four days later, Lyon will be welcoming Manchester City. Both games are crucial – Lyon need 3 points against ASSE to stay in the L1 podium race while they need at least a point (easier said than done) against City to ensure they can still qualify for the knockout rounds of the Champions League.

Bruno Genesio will have to make some tough decisions to figure out lineups that will be cohesive and fresh for both games.

Let’s hope he wears his Pep hat this week.

Nabil Fekir is fully fit after being taken off early against Hoffenheim. He played only for a few minutes in France’s friendly against Uruguay, so he should be rested and ready. Houssem Aouar and Moussa Dembélé withdrew from France’s U21 squad last week also to recover from lingering injuries, but they are both available as well. 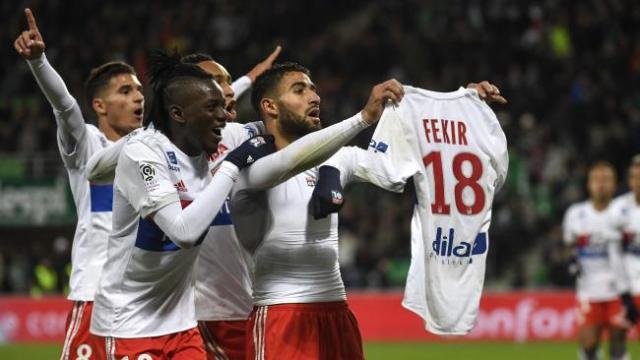 Léo Dubois is still injured. He’s been absent for over a month now for vague muscular reasons. But with Kenny Tete and Rafael available, there’s no need for Dubois to rush back. It’s doubtful that he would feature in either of the two upcoming games after not playing for so many weeks.

In the doghouse two weeks ago, Bertrand Traoré is back in the squad. He was left out against Dijon for a particularly horrible match against Hoffenheim, where his refusal to defend led to their equalizer.

Jeremy Morel, OL’s latest international superstar, will be suspended for this match.

Genesio is rumored to continue deploying his 3-5-2 lineup. It worked well against Hoffenheim but was so-so against Dijon. Genesio is likely to keep faith in this formation, but that does mean both Lucas Tousart and Pape Cheikh will be on the bench. Maybe this is will be ok against ASSE, but what Genesio will do for the upcoming Manchester City game is anyone’s guess.

OL 3 – 1 ASSE. Lyon can’t seem to keep a clean sheet, but this derby should fire up our sleepy and uninterested players.