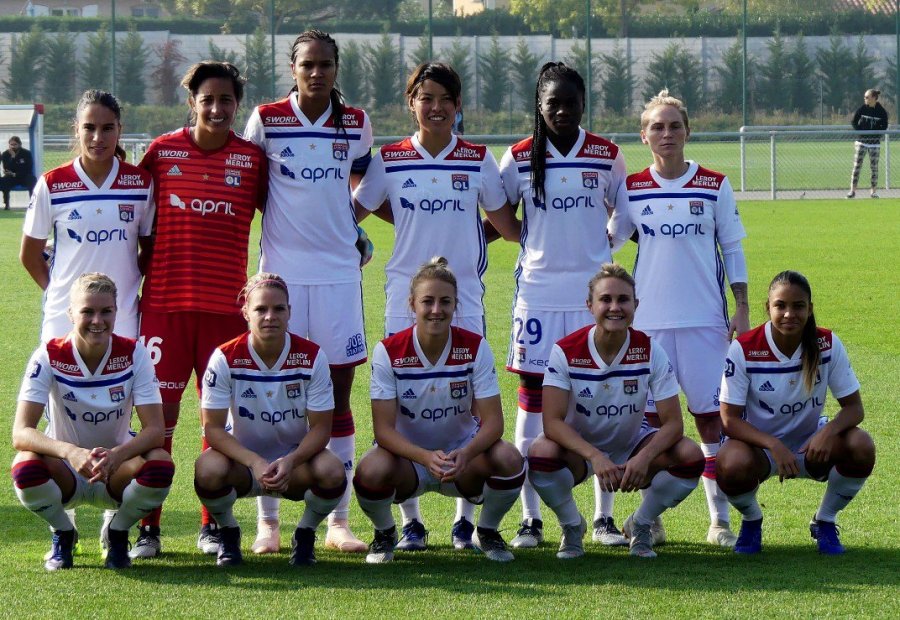 It was a daunting week for the French and European champions, with two games against top teams in D1 Féminine on either side of a trip to Amsterdam for a mid-week Champions League match.  But les Fenottes came through with flying colors, beating all three opponents and conceding just one goal over the week.  The final victory in the series was a 3-0 win over Bordeaux on Sunday, ensuring that Lyon remain on top of the D1F table.

A narrow 2-1 win over Montpellier, followed by a dominant showing against Ajax had Lyon feeling good going into Sunday’s game.  But OL needed to keep the foot on the gas against a much improved Bordeaux team that plans to compete for a spot on the podium this season.

Mylaine Tarrieu, who left Lyon for Bordeaux last season, did not make the trip due to a lingering ankle injury, but the visitors still fielded a strong starting XI, featuring French international Viviane Asseyi and Claire Lavogez, once believed to be OL’s next big thing.  There were changes to Reynald Pedros’s starting squad too; Lucy Bronze, who has been carrying an injury, was rested, sliding Griedge Mbock to right back and pushing Saki Kumagai into central defense alongside Wendie Renard. 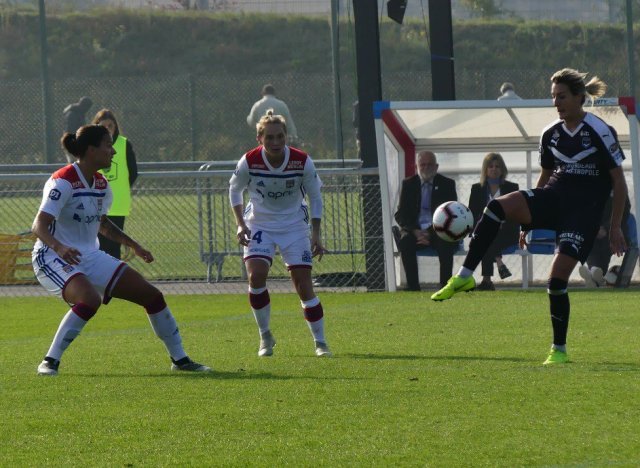 But the personnel changes didn’t slow les Fenottes who got on the board early with a goal from Amel Majri in the 8th minute.  Mbock won a one-on-one battle with her defender along the right sideline and pushed the ball forward to Delphine Cascarino.  Cascarino breezed to the endline before sending a cross into the box.  A nifty finish with the outside of the foot from Majri sent the ball past Bordeaux keeper Erin Nayler and into the back of the net.

There’s no reason to mess with what works, so Cascarino and Majri combined for a second goal at the half hour mark.  This time Welsh midfielder Jess Fishlock found Cascarino streaking down the sideline.  Cascarino’s cross eluded the goalkeeper and two defenders, and Majri finished the tap-in to the wide-open net. 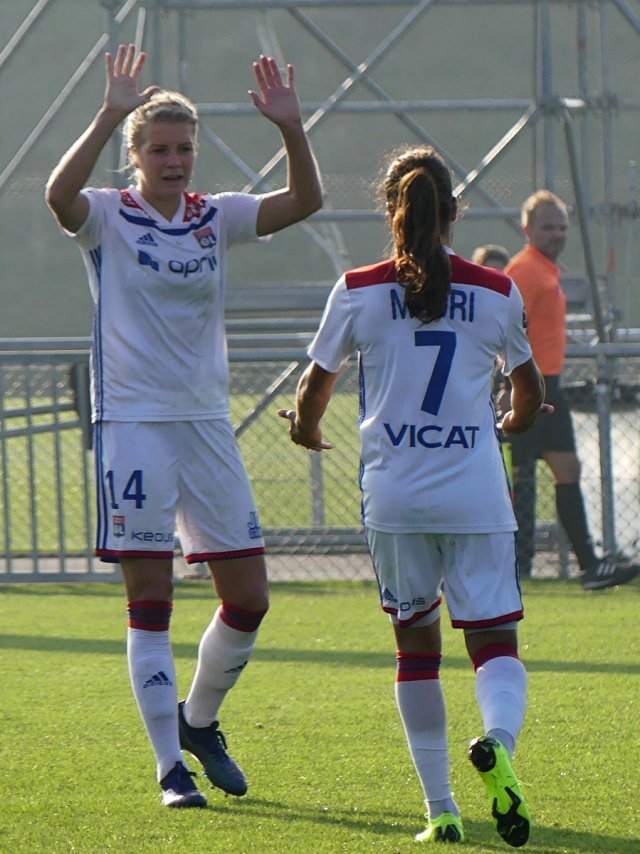 The lead was 2-0 at the break, and for all the threats in Bordeaux’s lineup, they hadn’t managed to do much of anything to put Lyon’s reconstituted defense in danger.  Should Lyon have turned their possession into more genuine scoring opportunities? Probably, but we’ll cut them a little slack given the long week.

As the game neared to a close, it was looking like another quiet one for Ada Hegerberg.  But the Norwegian superstar never stays off the scoresheet for long, and she showed why in the 80th minute.

Hegerberg wrestled the ball away from a defender in Bordeaux’s defensive half and broke for the top of the box.  She had options down both sidelines, but took the shot herself from distance, bouncing it past Nayler’s outstretched arm and into the net for her seventh goal of the year.  The lead never looked to be in danger, and Lyon walked away with three goals and three points.

It was good news/bad news on the injury front for our heroes.  Izzy Christiansen looked to tweak something in warm-ups, and although she put forth a valiant effort to play anyway, she was forced to withdraw in the 20th minute. 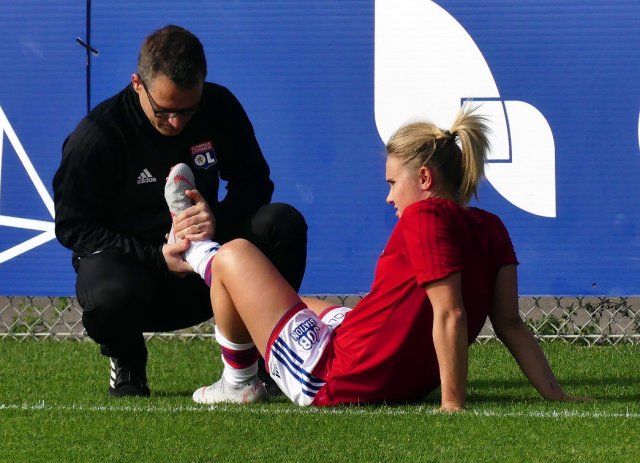 The English midfielder’s departure meant extra minutes for Dzsenifer Marozsan as she continues to ease herself back into action.  Maro is still finding the pace, but oh man, is it good to have her technical ability back on the field.   Rounding out the midfielder injury report, rumor has it that French captain Amandine Henry may be looking to return from her clavicle injury as soon as two weeks from now. 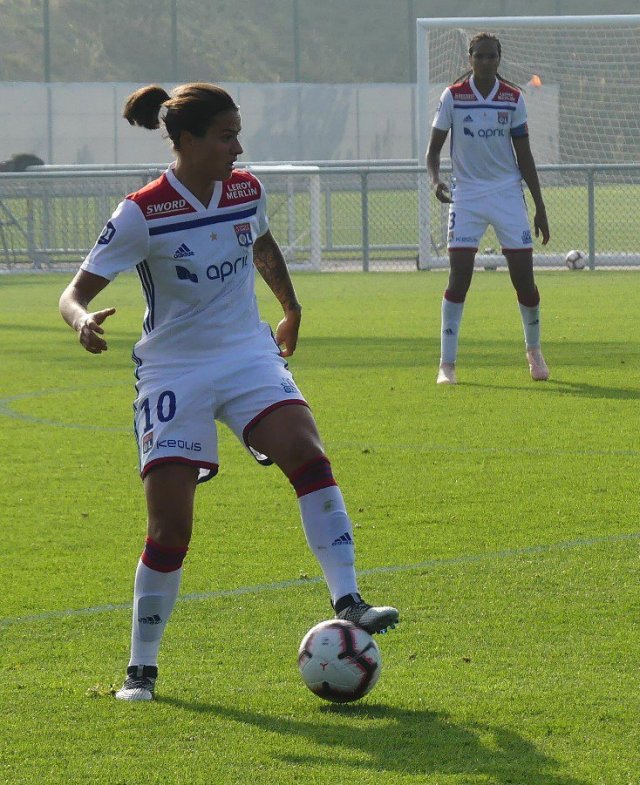 Player of the Match honors go to Amel Majri, because sometimes these things don’t have to be hard.  Majri currently ranks 3rd in D1F for goals and 1st for assists, with six of each to her name, and has scored in every Champions League game this season.  She is taking full advantage of her new spot in the OL attack, and while goals have been (relatively) hard to come by for Lyon, Majri has been a difference maker time and time again.  We’re all for Amel continuing to score clutch goals and make these choices easy for us. 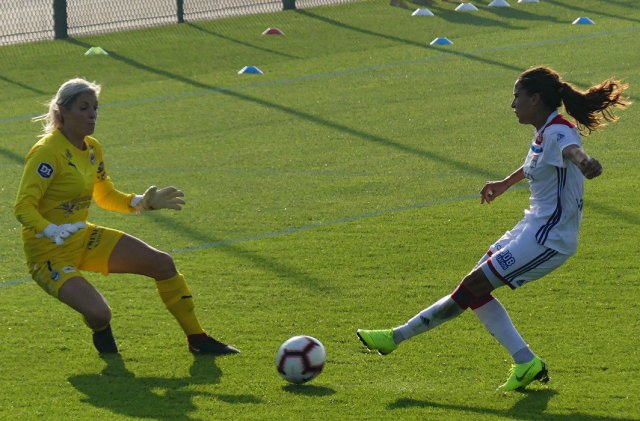 Honorable mention to Delphine Cascarino, whose two assists were excellent and who turned in maybe her best performance of the season thus far. 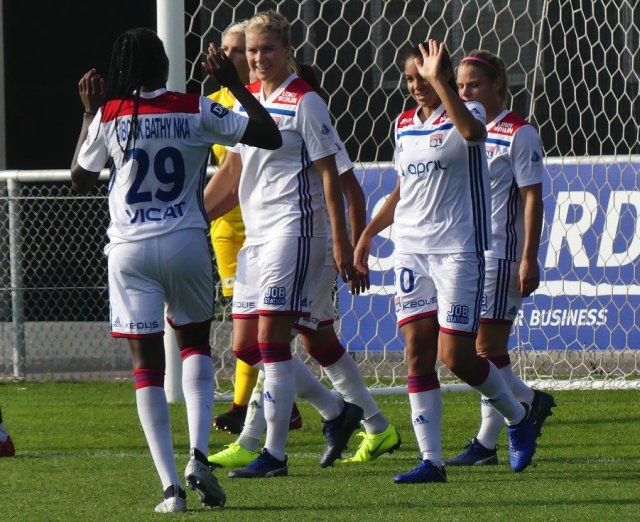 Elsewhere in league action, Montpellier apparently decided they were sick of us writing every week about how hard it has been for them to find goals.  They thumped FC Metz 11-0, including a 5-goal performance from Stina Blackstenius.  Paris FC picked up a second win under their new coach, beating Soyaux 2-0.  PSG also secured a 2-0 win over Dijon, with Marie Antoinette Katoto scoring to keep her spot as D1F goals leader.  Guingamp beat Lille 3-0, and Rodez and Fleury played to a scoreless draw.

Lyon hit the road to face Metz next weekend, as the last-place club get no mercy after their double-digit loss to Montpellier.  The match kicks off Saturday, October 27, at 14h30 local time (8:30 a.m. ET / 5:30 a.m. PT).  Metz have scored only a single goal in their six games this season, and they surely look to be headed for relegation, barring a dramatic turnaround.  Perhaps this will be a chance for Lyon to again rotate the lineup ahead of next week’s Champions League return leg.