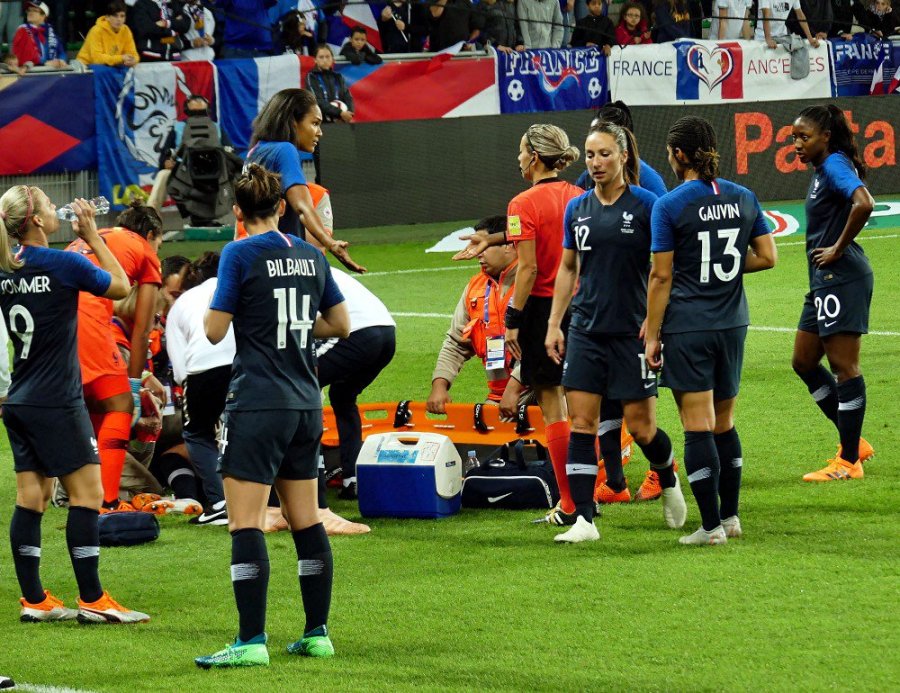 We ask just one thing from international friendlies: No injuries.  But you can’t always get what you want, and Amandine Henry’s early exit with a clavicle injury has cast a pall over the break for les Fenottes.  But like Henry’s French teammates, we too will soldier on with a recap of big wins for les Bleues, frustration for England, and rising hopes for Canada and the Netherlands.

Preparing for every possible style of opposition, France has committed to seeing opponents from across the globe in the run up to next year’s World Cup on home turf.  After last month’s match up with Mexico, les Bleues invited a promising young Australia squad and a feisty Cameroon team for this round of friendlies.  Coach Corinne Diacre also took the opportunity to experiment with her systems, running out a 3-5-2 against Australia and a 4-4-2 against Cameroon. 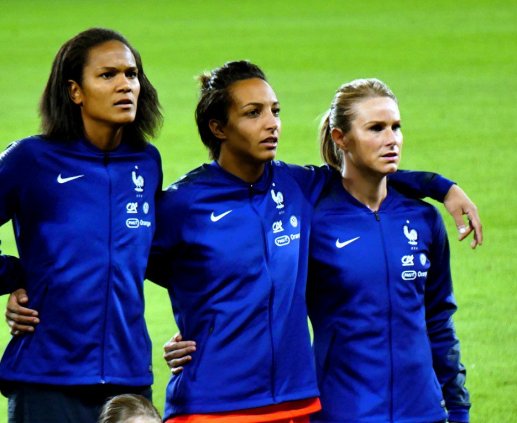 France cruised to wins in both games, buoyed by strong second half performances that improved on two wasteful first halves.  Australia’s short-staffed squad was missing superstar striker Sam Kerr, among others, and a second half brace for Eugénie Le Sommer made the difference for les Bleues.

A few days later, after a slow start against Cameroon, France bagged two goals ahead of the break before taking advantage of tired opponents to finish with a 6-0 win.    France has now recorded six straight victories since March—a period in which they’ve scored 24 goals and allowed zero.

As always, les Lyonnaises were key to France’s success.  But the good showing for les Bleues was marred by Amandine Henry‘s injury inside 10 minutes of the Australia game.  The France captain hit the ground hard after a rough challenge, and she walked off clutching her shoulder, apparently in a lot of pain. 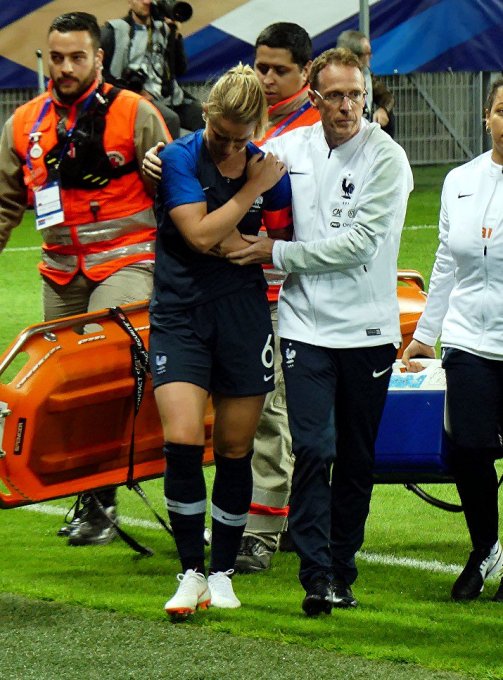 It was a displaced clavicle for Henry, and she’ll be sidelined for at least six weeks.  Bad news for France and bad news for Lyon, but the six week window could have been much worse and fingers crossed this just means the teams are getting over the injury bug early in the season.  OL ‘s decision to snag midfield reinforcements just before the transfer window closed suddenly looks very important.

Henry’s injury meant the captain’s mantle was passed along to a white hot Eugénie Le Sommer, who spent the international break showing off just how many ways she can hurt the opponent.  Le Sommer opened the scoring against Australia by cleaning up a loose ball spilled by the Matildas’ goalkeeper, then added a beautiful strike from the top of the box to secure the victory in the 90th minute. 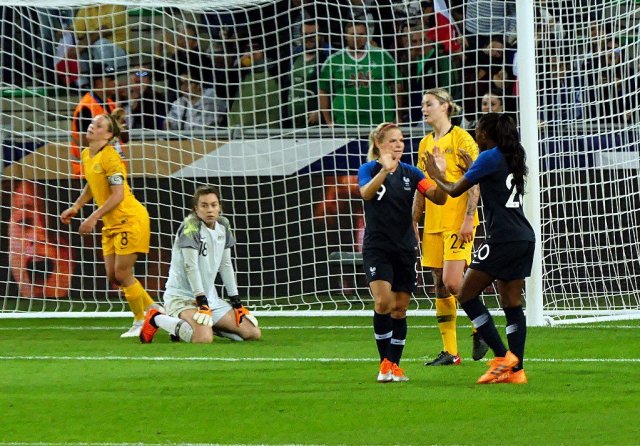 And Le Sommer wasn’t about to be left out of the goal parade against Cameroon, as the 5’3″ striker marked France’s third goal of the night on a sharp header.  Le Sommer was left off this year’s shortlist for the inaugural women’s Ballon d’Or, but if she keeps the goals coming next summer, she’ll be right at the top of the 2019 list.

When Le Sommer came off in the 76th minute against Cameroon, she passed the captain’s arm band to yet another OL veteran, Sarah Bouhaddi.  It was a nice show of confidence in Bouhaddi, who has certainly earned her coach’s trust over the past few months.  Two clean sheets during this break mean Bouhaddi now has gone five straight without allowing a goal for her country, and Coach Diacre opened the break by announcing that Bouhaddi will be France’s starting goalkeeper next summer.

In the end, it can’t have been that tough a choice for Diacre.  She gave others an opportunity to stake their claim to the starting role, but the results left no doubt about who should be the number one.  Since the Euros last summer, Bouhaddi has allowed just 2 goals in 9 games against Germany, England, the USA, Canada, Australia, Mexico, Italy, Chile, and Cameroon.  Meanwhile, French goalkeepers not named Bouhaddi have allowed 9 goals in 6 games against Germany, England, Spain, Sweden, Ghana, and Nigeria during the same time period.

Bouhaddi will have plenty of eyes on her next summer, but she’s been silencing the doubters for months and proving that the French net is still her territory. 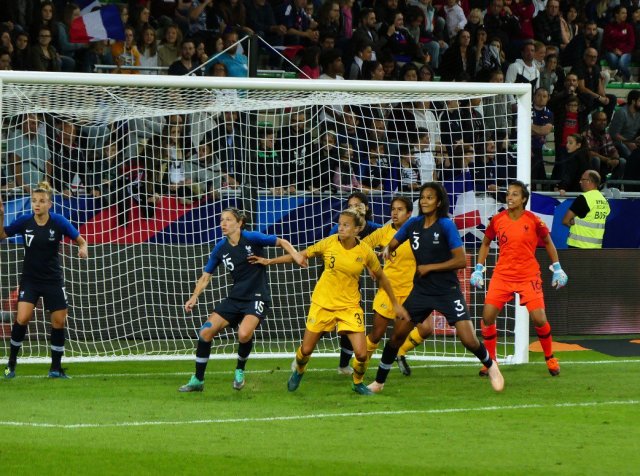 Amel Majri sat out the Cameroon game, but she was France’s most dangerous player for much of the match against Australia.  It’s hard not to wonder just how different last year’s Euros might have been for France if Majri had been healthy enough to patrol the left flank.  Wendie Renard and Griedge Mbock contributed their usual solid defense to France’s back line in both matches, and Mbock added a pair of goals (including one from the penalty spot!) against Cameroon.

Finally, 19-year-old Emelyne Laurent made her senior international debut for France, coming on as a sub in both matches.  She used her speed to earn a penalty when she was clipped in the box late in the match against Cameroon, and she’ll hope to have shown Diacre enough to earn her second selection when France faces Brazil next month. 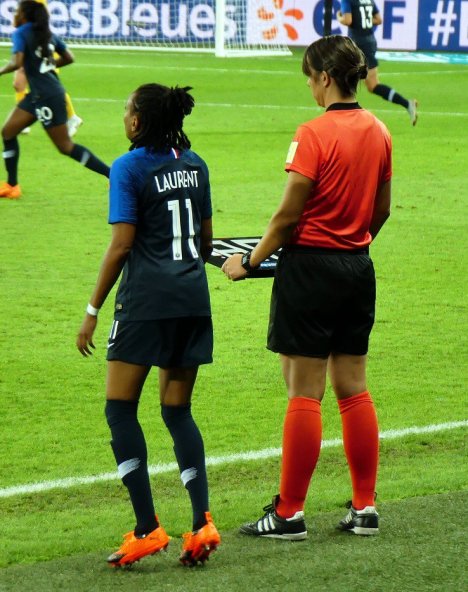 There are no easy tickets to France next summer, and that’s never been more evident than in the UEFA playoff for the final spot.  Last year’s European finalists faced off in a two-game rematch to determine who would stay alive to face Switzerland for the remaining berth at the World Cup.

In the end, Shanice van de Sanden‘s Netherlands squad survived, beating Denmark 2-0 at home and 2-1 on the road to advance to the playoff final.  The Lyon forward came up clutch, contributing a goal and an assist in the first match.  The raw emotion was palpable as van de Sanden dedicated her strong performance to her grandmother, who recently passed away.

While van de Sanden is one step closer to securing her spot in France, the loss for Denmark means UEFA Player of the Year Pernille Harder will be absent from next year’s World Cup.

Lackluster From The Lionesses

Lucy Bronze and Izzy Christiansen will be less pleased with their team’s showing during the break as England played two frustrating matches against Brazil and Australia.  England came away with a 1-0 win over Brazil, but the scoreline didn’t match the domination of the English front line for much of the match.  Both Bronze and Christiansen played the full 90 in the victory.

In the second match of the break, Australia was able to hold England in check, with the match ending in a 1-1 draw.  Again the Lionesses carried play and had the better of the chances, but they were wasteful in the final third and a defensive lapse left Australia’s Clare Polkinghorne all alone off a corner to even the score.  Bronze, hailed by her coach as the “world’s best player” last week, played her usual 90 minutes, but Christiansen remained on the bench.

Not the result we wanted…
Going to have to work harder.. #RoadToFrance continues 💪🏼 @Lionesses 🦁🦁🦁 pic.twitter.com/5CBFLVdGdJ

Bronze and her teammates had reason to be aggrieved with the officials in the Australia match, as they somehow managed to overlook two obvious penalties and incorrectly waved off another goal.  Lyon fans will be shocked—just shocked!—to learn that the head ref on the night was Florence Guillemin, who famously erased OL’s equalizer in the Coupe de France final last spring.  An old foe strikes again.

Germany looked lost at the She Believes Cup in the spring, and their coach Steffi Jones paid the price.  But the European powerhouses never stay down for long, and since March, the German squad has been on a roll.  Their good run continued with a 3-1 win over Austria, as the Germans got goals from Alex Popp, Linda Dallmann, and Lea Schuller.  Six straight wins now for Germany, as they seem to be rounding into form with the World Cup approaching.  OL’s Carolin Simon came on as a sub in the 60th minute in the victory.

An ocean away, Kadeisha Buchanan‘s Canada side earned two comfortable wins to kick off CONCACAF qualifying action.  Buchanan played the full 90 in central defense in the opening match, a 2-0 victory over Jamaica.  And she had a front row seat from the bench for her compatriots’ 12-0 trouncing of a weak Cuba side in the second game.

Canada’s defence pairs Ashley Lawrence and Kadeisha Buchanan on the right side. Buchanan is making her 79th appearance for #CanWNT while Lawrence is making her 64th. #CWC pic.twitter.com/B3ZYzj5qWD

Canada play Costa Rica in the final match of group action on Thursday, October 11, but their spot in the semifinals is all but secure.  They’ll face a plucky young Panama side that has surprised throughout the tournament, even knocking Mexico out of qualifying with a shock 2-0 win.

The winner of the semifinal will earn an automatic spot in France for 2019; the loser will either need to secure 3rd place in the CONCACAF tournament or prevail in a playoff against Argentina to qualify for the World Cup.

The gang reunites in Lyon with a big match against Montpellier set for Sunday, October 14 at 15h00 local time (9:00 a.m. ET / 6:00 a.m. PT).  Last year’s third place finishers have struggled to start the season and find themselves buried in 10th place in D1 Féminine.  But Montpellier have too much talent to be taken lightly, and they’ll be playing to save their season.  Meanwhile, OL have to adjust to life without Henry, and we’ll be keeping a close eye on how the midfield takes shape in her absence.

One thought on “Women’s International Round Up: O Captain, My Captain!”