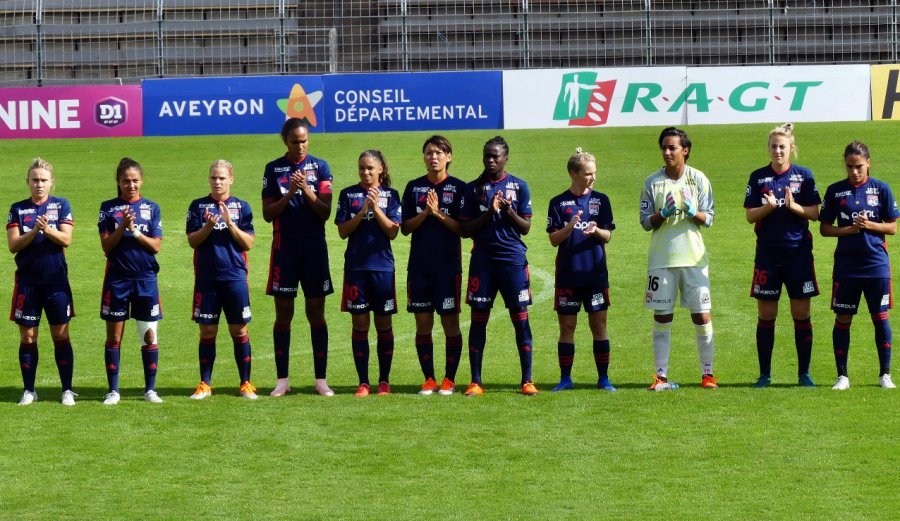 It wasn’t always pretty, but it’s the result that counts.  Lyon picked up a 2-0 win away at Rodez on Sunday, as Saki Kumagai and Delphine Cascarino each recorded their first goals of the season.  And with PSG only managing a draw at home against Lille, Lyon are alone in first place as the only D1 Féminine team with 5 wins from 5.

Coming off a Champions League game on Thursday and with the international break looming, the objective was simple for Lyon on Sunday: No mistakes.  Coach Reynald Pedros clearly planned to manage minutes for his star players, shaking up the starting XI.

Pedros started with Amel Majri, Eugénie Le Sommer, Delphine Cascarino up front, while Ada Hegerberg was absent, perhaps a bit banged up after a busy September.  Jess Fishlock made her Lyon debut in the midfield alongside Izzy Christiansen and Saki Kumagai, as Amandine Henry got some much deserved rest before coming off the bench in the second half.

Lucy Bronze also came off the bench, with Selma Bacha starting at right back, while Carolin Simon occupied the left back position.  With Kadeisha Buchanan away for international duty, Wendie Renard and Griedge Mbock started at center back as usual, and Sarah Bouhaddi was back between the posts after Lisa Weiß’s midweek start.

The unusual lineup, coupled with a very tight defensive block set up by Rodez, made for yet another slow start for OL.  Les Fenottes dominated possession, worked the corridors, and rained crosses into the box, but the final pass often wasn’t there, and Lyon are still looking for better in terms of finishing their chances.

But, as is often the case, a goal was inevitable and it came through Saki Kumagai in the 40th minute.  With plenty of time and space, Bacha swung a dangerous cross into the box from the right side.  Christiansen nodded it down in front of the goalkeeper and Kumagai buried it.  Always good to see Kumagai, the penalty kick specialist, remind D1F that she can score from open play as well.

That’s where it stood at the half, and the story after the break was much the same as the first 45 minutes.  Lyon had all of the ball, and pushed hard against Rodez’s defensive wall.

In the 51st minute, Le Sommer, who was held in check much of the match, found herself with some space along the end line to the left of the goal.  She lined a cross into the box, which bounced first off a Rodez defender and then fortuitously off the far post.  Cascarino was first to react, launching the loose ball into the roof of the net to open her account for the season.

If Lyon thought they could relax with a 2-0 lead, Rodez quickly reminded them that nothing is that easy.  With Christiansen setting up for a free kick a few yards outside the box, Renard and Mbock came forward to provide targets for a potential header.  But Rodez cleared the free kick back to Bacha, who slipped as she tried a pass to the outside.

Rodez intercepted the pass, and slotted a through ball to striker Kim Cazeau, who was off to the races.  Fishlock was the last man back, and Cazeau blew by her, setting up a one-on-one duel with Sarah Bouhaddi.  OL fans held their breath as Cazeau loaded up for the shot, but Bouhaddi came up trumps, making an outstanding save to ensure Lyon’s streak of clean sheets continues.  For far too long we’ve heard that Bouhaddi lacks concentration, but she had absolutely nothing to do for 99% of this match and still came up with an immense stop.

The final half hour played out without many clear chances, and OL settled for the 2-0 victory.  After 3 games in 8 days, this wasn’t one for the highlight reels, but Lyon got the win, and now will have a few days to reset.

It was a decent debut for new recruit Fishlock, who played the full 90 minutes while still settling in with her new teammates.  Her opportunities were somewhat limited as Lyon focused on working the ball down the sidelines rather than through the middle, but she got forward often to create some options for her teammates and she worked hard on ball recovery when Rodez took possession. 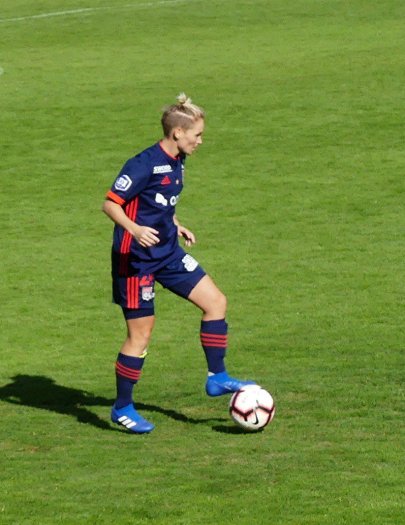 She even had a golden opportunity to celebrate her debut with a first half goal, but a timely block from the Rodez defense kept her point blank effort out.  Fishlock will need more time to catch up to Lyon’s game play and build rapport with the rest of the gang, and the international break should help.

Player of the Match goes to Saki Kumagai, who opened the scoring and had several other good chances on net.  We know Kumagai is world class in her standard spot in defensive midfield, but we love seeing her get involved in the offense as well.  Honorable mention goes to the captain, as Wendie Renard celebrated her 200th D1F game for Lyon.

Around the league, the big story was PSG’s surprising 1-1 draw at home against Lille.  It’s still early, and OL hasn’t looked as dominant as in past years, but PSG simply can’t afford to drop points against other opponents if they hope to take home this year’s D1F title.  Montpellier’s struggles continued, as they only managed a 1-1 draw against Soyaux.  Paris FC also continues to disappoint, drawing 1-1 in a home match with Fleury.  Claire Lavogez was on the board as Bordeaux beat Dijon 2-1, and Guingamp defeated winless Metz 2-0.

It’s off to international duty for the gang now, as we continue to look ahead to next summer’s Women’s World Cup.  Critical matches ahead for Shanice van de Sanden, as the Netherlands, European champions, must get by old foes Denmark to stay alive in World Cup Qualifying.  Kadeisha Buchanan will also be playing for a spot in France next summer as her Canada squad competes in the CONCACAF Women’s Championship.  Back in Europe, Emelyne Laurent makes her debut with France’s senior team after a good showing at the U-20 World Cup.

Lyon are back to work on Sunday, October 14 at 15:00 local time (9:00 a.m. ET / 6:00 a.m. PT) against Montpellier.  Before the season, we would have circled this game as the first real battle of the titans in D1F for OL, but Montpellier’s terrible start to the season has them buried in the bottom half of the table.  They’ve managed just 1 win and 1 draw from 5 games, and, even more troubling, just 2 goals (1 from a penalty).  But Lyon can’t afford to take Montpellier lightly, and should be wary of last year’s third-place finishers stepping up for a big game.

All photos via SN Ternay (@SyNTernay)