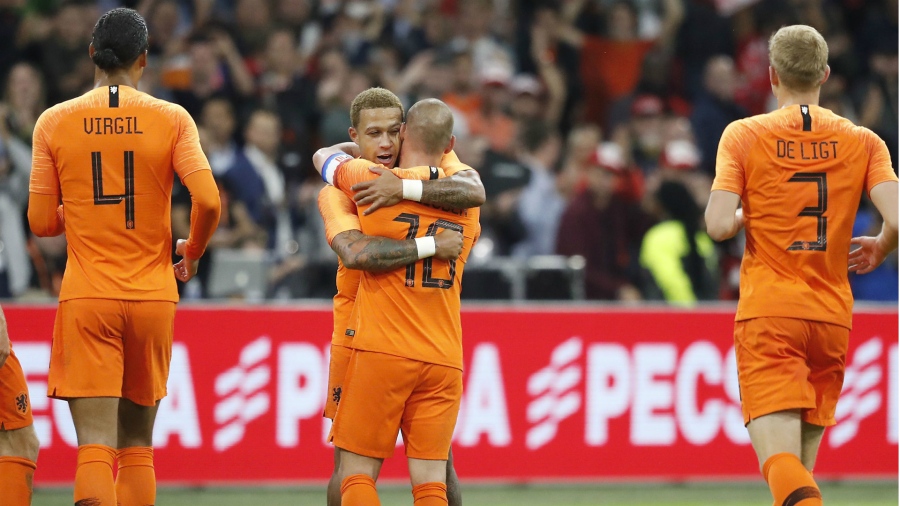 Olympique Lyonnais is off for one more week, but many of les Gones are still in action. And the international break has generally worked out quite well for OL’s players engaged in patriotic duties.

Nabil Fekir, and the Dutch duo of Memphis Depay and Kenny Tete were the first to get a taste of international football during the past week. France was unable to break down an almighty German side, but neither did it concede, thanks to a monumental Alphonse Areola.

Nabil Fekir was introduced late in the game and did not have time to make an impact. However, he was introduced in an environment not unlike those of recent OL games – in a sterile match devoid of attacking opportunities.

In the Netherlands, Memphis and Tete narrowly edged out France’s World Cup opponents – Peru. Memphis himself scored the Netherlands’ two goals in a performance that was only overshadowed by Wesley Sneijder’s deserved farewell.

Ronald Koeman gave the Dutch attacker his preferred role – the pivotal striker position – in his 4-3-3 formation. The Dutch striker killed the Peruvians’ hope with two well-placed left-footed shots. Whether that will be enough to inspire Bruno Genesio to play him as a striker up front remains to be seen. Nonetheless, Moussa Dembélé will want to have a say about that after his performance with Les Espoirs.

Les Espoirs had been faultless in their EURO 2019 qualification campaign, but approached the game against Bulgaria with a context mired in controversy. Jean-Kévin Augustin raised eyebrows when he turned down the call-down, citing fatigue, only to start in a Red Bull Leipzig friendly later in the week. The energy drink puns write themselves.

France’s youth had one clear goal in mind – beat Bulgaria and qualify for the EURO 2019. It was a short-lived scenario. So short, in fact, that the game had not even started before it became reality; Slovenia failed to break down Kazakhstan and killed the suspense. Les Espoirs would finish first and qualify for next year’s European competition, regardless of the result.

Les Espoirs dominated Bulgaria for large periods of the game, and les Gones’ little ones contributed a lot to the cause. A spirited Tanguy Ndombele, partnered up with Lucas Tousart, was always looking to make things happen. And happen it did, thanks to Moussa Dembélé.

The new Lyon signing lacked service for most of the game. However, he was always at the service of his teammates, often going wide to open up space. Not uncharacteristic of the ex-Celtic player, and neither is his heading ability, which he used to open the scoring from a very tight angle.

Dembélé was the only scorer of the game, keeping up France’s perfect record in the campaign with eight wins from as many games. He was later subbed out for yet another OL player – Martin Terrier – who combined ideally with Houssem Aouar, himself playing on the wing.

There is still one week to go before OL returns to action, but there are more opportunities to watch les Gones. The biggest game is this evening, when Fekir’s France faces off against Memphis and Tete. Far from Lyon, Maxwel Cornet may finally quench his thirst for first-team football when the Ivory Coast travels to Rwanda today.

Canadians could see the debut of Zachary Brault-Guillard against the US Virgin Islands. The five youngsters with les Espoirs also return to action on Tuesday against Luxembourg’s youths. Finally, following his maiden goal against Moldova, Christopher Martins-Pereira meets minnows San Marino with Luxembourg’s senior squad, on Tuesday.

The international players return to training in Lyon over the next few days before Saturday’s game in Caen.