Just when you thought you had forgotten the bad result against OGC Nice and the infuriating image of Genesio and Aulas feeding us false positivity and propaganda in a post match press conference. The name Genesio again crawls its way into your brain, except this time the reasons are outside the confines of football.

In the late evening a video has started to surface on social media revealing what appears to be Bruno Genesio leaving a venue, only to be chased and harassed by angry supporters. Now there is no confirmed proof of the exact details of this incident, whether there was an argument beforehand which later escalated, we don’t know, but the point is that the situation is reaching boiling point at OL.

Anyone who knows me and follows me on Twitter will know that I am not a fan of Bruno Genesio as coach, however at no point do I nor can we as fans, condone the violent actions that may have taken place. Bruno Genesio despite his short comings as a manager is still a human who has the right to live a life separate to his job.

We must separate the man from the manager. For those unaware and not close to the club there is a lot of deep frustration towards the lack of ambition and Genesio is the face of it all.

Like all supporters I have my own stories of frustration. Waking up at all early hours of the mornings to see us get fleeced by a newly promoted team, which has me feeling like slamming my head inside a car door. This frustration we feel match in and match out is only further fueled by the arrogant statements of Genesio towards the OL fan base. The famous statements calling the supporters on Twitter as the “Café du Commerce” shows how little respect he has for criticism.

With those close to the club too afraid to speak the truth, it’s up to the supporters on social networks to be the voice of the people. I admit we don’t often voice our criticism as constructively or respectfully as we could on socials, however this doesn’t discredit the honest opinions of those who hold nothing else, but passion and love for the club. We as fans are educated enough to realise the Inadequacy of the performances we see. Tactically OL under Genesio has 2 sides to its game… win ugly or lose ugly. 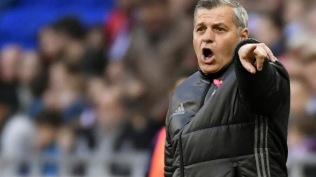 The tactically dead performances on the pitches in Decines and abroad are as obvious to all fans across the globe, yes even as far as Australia. So when the world is starting to wake up to the glaringly obvious holes in the team performances of the club, where does this frustration fall to? The bad results, like herpes continue to fester up at the worst possible times throughout the seasons, so who is responsible?

It’s obvious that Genesio is not a good manager and that he is in the job because he is survived by the quality of the players and the negligent support of his dictator…Oh I mean president! Any decent manager would look at this team with a lustfull glare knowing the potential that lies in the legs of the players. So why waste 3 years with a manager who has never shown a tactical prowess, has the best squad of players OL has seen in years and yet can’t break down a newly promoted team looking to park the bus and restore their goal difference?

Aulas! He is the only man to know the real reasons why we let OL stagnate under the tutelage of “Pep” Genesio. This is where I see the real source of the fans boiling hot frustration. Aulas also holds an arrogant view of the fans. He recently referenced overseas fans as fake and who hold no place as legitimate supporters of the club. His opinions of those in France is not any better. This is also evident in his communication, whether on Twitter or inside press conferences, his communication is consistently riddled with blatant lies and empty promises comparable to that of a certain American President. It’s blatantly obvious that he thinks very poorly the intelligence of the OL fan base.

So in my opinion it’s Aulas who holds a lot of the blame for the frustration of supporters towards Genesio. It is he who allows Genesio to continue and it is he who aggravates the fans. So is this an excuse to take our anger and humiliation into our own hands… literally? Absolutely not! If Genesio and Aulas already think and treat the fans of OL as “Beaufs” and mindless meat-heads then it’s up to us to prove them wrong.

These apparent actions towards Genesio do not reflect a current trend among the vast majority of supporters. It’s important that we distance ourselves from the threats and actions of violence from some supporters who most likely have nothing else in their lives other than the football of this club. The frustration is real and we are united together as fans, that change is needed and necessary. It is however, up to all of us to nurture and educate our fellow supporters in the correct avenues to advocate for change.

These alleged incidents serve only to disrupt the club and have no place in a club as prestigious as Olympique Lyonnais. It’s fun to joke FC Castagne but in reality it is the beautiful, attacking and dominant football that makes OL famous. This is the real image that fans of the club should hold on to and look to preserve.