It’s near midnight on 8/28, so I’m aware that there’s still two days left where things could drastically change. But Lyon have a poor track record of happy surprises, so I’m going to tackle their mercato – or lack thereof.

I confess that I debated awhile if I should even post. No one has any idea what’s going on, and what the media is reporting is often times incorrect and sometimes a straight up lie. So if anything I wrote below is false, blame Bilel.

(Note: I wrote this in the evening of 8/28 in US Eastern time). By the time this posts, some of this information may be outdated because I may be sleeping when Aulas finally decides to do some business.)

Before I jump into the rumors, let’s recap Lyon’s financial position so far this summer. The club has made €68.6m in sales and has bought €15m (half of which is just paying for Tanguy Ndomobele’s fee after his loan). The previous year, they sold €120m and purchased about €60m.

So Lyon are sitting pretty.

Most of this money will likely be funneled into paying off the stadium’s loans, of which €20m per year is just interest. But that still leaves a lot of cash lying around.

Aulas had started the summer saying that his intention was to keep his main players, and when Nabil Fekir and Marcelo announced they were staying, Lyon were in a good place. A few defensive signings, and they were solid.

However, the past two weeks have thrown everything into the air.

Lyon are notorious for never saying no to a player’s sale if the offered amount is worth more than the player’s value. They’re also known for not keeping players against their will. If someone wants to leave, Lyon will usually accommodate.

The problem is that it’s the last 48 hours before the window is shut, and Lyon are about to lose two key players without having made any signings to replace them. Let’s discuss.

The biggest news of the last 24 hours is Mariano’s all but confirmed departure. If you live under a rock and/or don’t care about anyone outside of the Premier League, the summary is that Sevilla put in an an offer for Mariano a few days ago. Lyon tentatively accepted, and then in swooped Real Madrid, who are now matching the offer.

Per the terms of Mariano’s original sale from Real Madrid, they will receive 35% of his future sale at Lyon as well as the opportunity to match any offers received for the player. With this in mind, Lyon naturally planned to sell Mariano for €80m, so even if they pocket just 65%, that’s still a good amount.

So it’s rather inexplicable that the numbers being batted around are closer to €22m. Lyon are denying it, but rumors are floating that either Real Madrid used Sevilla to bring down the price of Mariano or that Lyon used Sevilla to bring Madrid to the negotiating table. Either way, when it comes to Jean-Michel Aulas and Florentino Perez, something sleazy is always afoot.

What we do know is that Mariano wants to leave, and given that he’s not even a starter, would rather return to Spain. Sevilla need an attacker to augment their front 3 while Madrid have yet to make any big signing to replace Cristiano Ronaldo. And while Mariano is hardly big name, he had great form last year and is a Madrid youth product.

Lyon won’t be too sad to see him go as he hasn’t yet had the same form as he did earlier last year, and there have been accusations that he’s not fitting into Lyon’s style of play. I personally call that bananas because he still netted goals in the double digits, and just because he hasn’t scored this year yet doesn’t mean anything. Houssem Aouar has been even worse, and we’re still keeping him. Right?

We don’t know what the final transfer fee will be, but don’t expect too much of a profit. As usual, Lyon waited until the last minute and didn’t plan it well. But do expect him to be on a plane to Madrid soon. 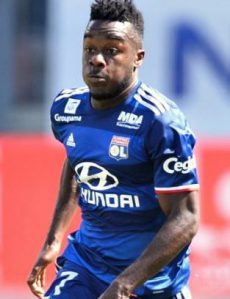 This is the one departure that Lyon have been actively pushing all summer. With a host of admirers, leading the pack was Bundesliga club Wolfsburg. They submitted a €15m bid which was rejected by Lyon, who want closer to €20m as well as a percentage of resale. Wolfsburg said they wouldn’t go past 15m, but according to L’Equipe they are now considering going up to €18m. Given that they still haven’t signed anyone, things look positive for Cornet, who’s been cryptically posting on Instagram about how he’s halfway to his goal.

However, Genesio wants to keep him, partially to offset the departures and partially because he just likes the guy.

This is also expected to be resolved by end of day today.

Will be announcing a contract extension soon. I guess Aulas did promise us a big summer signing.

Frustrated, Lyon are now in discussions to loan Mapou out to Bursaspor, potentially covering 50% of his salary. Sucks for Lyon.

This is a rumor not grounded in any reality. But boy, it sure does sound nice. Kasper Dolberg is more likely (but still also not going anywhere). Other unlikely tracks were Paco Alcacer and Luis Muriel.

This name has increased traction in the past 24 hours. Originally a Marseille target, they are strapped for money, which now puts Lyon in pole position for this Celtic striker. Celtic don’t want to sell him, but if he has to go, they won’t look at anything under €15m.

One of the brightest spots on the Lille squad, he’s a pacey winger that is capable of shredding any defense. The problem? He’s at least €30m. Lille don’t want to sell him either because they expect to get at least €50m the following year. So as nice as this signing would be, it’s considered less likely.

A Defender. Any defender. Even a pile of sticks.

It’s been announced that Lyon wouldn’t be signing another defender after Jason Denayer. Which is crazy, but what else is new? They have been linked with a couple of names – Martin Hinteregger and Adama Soumaoro are the latest – but Lyon have been making it clear that an attacker is now their priority. However, there are still rumors floating around that if Benfica does not qualify for the Champions League today, Lyon may make another last ditch bid for Ruben Dias…